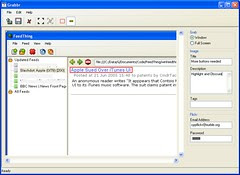 More tinkering with Grabbr has resulted in a 1.1 release.

I've added the ability to draw pretty red boxes for highlighting stuff (assuming you don't want to use flickr's notes), and also an obscuring button so you can blank out your confidential data before uploading.

It's feeling quite slick now. If only Paul would come up with some nicer toolbar buttons.