Showing posts from May, 2005
Show All 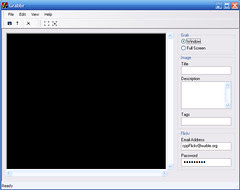 I'm currently writing a tool to take screenshots and upload them to Flickr. The core functionality is done, but I need some more attractive icons and buttons. You can see the tool's progress in its own Flickr account . I think it's quite cool 1 to watch the tool record its own development. [1] For values of "cool" that include a large dose of geekery
Read more

Since we're talking about ID cards

- May 31, 2005
Former Lib Dem MP and all round knowledgeable person Richard Allen chimes in: There are a number of red herrings in the Government’s case for ID cards (Guardian p4 26th May). The biggest of these is the card itself. The most important element of the proposed Bill is not the issuing of an ID card but the national identity database. Identity cards are only an optional and expensive extra to this database. So when the Government ‘concedes’ that it will not be compulsory to carry the card, this is meaningless as it is common practice for us all to carry our irises and fingers from which the Police will be able to extract the information they need to check against the database with portable scanners. As live scanning technology becomes cheaper, it is quite possible that the cards will be quietly dropped in favour of direct checking of biometrics against the database in a range of situations. Which makes it all even more worrying, since ID theft can't even be countered by cancelling
Read more

Could you cancel my fingerprints while I cut up my eyeballs please?

- May 30, 2005
The UK and US are getting biometric ID cards. Regardless of your opinion of national ID schemes, it seems to me that a biometric based system is just asking for unnecessary extra trouble. A quick Google suggests that it's already possible to fake a fingerprint scan with relative ease which isn't a good start. Let's give the Government the benefit of the doubt and assume that: They can improve scanners such that the existing fingerprint hole can be plugged. Retina scanners are not currently foolable. 1 Given the length of time these systems would have to be in place to be cost effective (ha!), it's almost inconceivable that the scanning technology will not be outstripped by some deception technology during its lifetime. Now we're reliant on people taking the scans to be vigilant to spoofing methods again, and we know for a fact that that won't happen . So what do I do in this future world of perfect global identification when someone has my ident
Read more

- May 26, 2005
I haven't used FeedThing for ages, I've been using Bloglines so I don't have read/unread issues reading at home and work. The Usability Manager in my company does use it however to keep up to date with internal RSS feeds. It all stopped working a few weeks ago and I've discovered that it contains a schoolboy error that renders it incapable of working at all in the month of May. She's christened it the May-lennium bug. Everyone hates a smartarse.
Read more

Why I am no longer a Vodaphone customer

- May 23, 2005
I just sent this letter to Vodaphone customer services. Dear Sir, Having been on one of your pay monthly contracts for over a year I was due to renew my contract and get a new phone. Now I understand that there's a certain amount of haggling to be done to get the best deal. I find it unpleasant, but it's a fact of life. I had a specific phone requirement, so I looked around for the best deal I could find. Having found what I wanted, I called your upgrades department and explained what I wanted, and what it would cost me elsewhere. They told me that there was nothing they could do about it, that they only had the deals available to them. That seemed fair enough, so I went out and got myself a new phone and contract. When I called to cancel my old contract however, I was surprised to be offered a tariff that undercut my new deal. I explained that I had already signed a new contract, and it was suggested to me that I should go back and cancel this contract. I find th
Read more

- May 19, 2005
My Nice Titles Greasemonkey script broke with the combination of GM 0.3.3 and Firefox 1.0.4. All is well now though and you can get the latest version .
Read more
More posts